10 Facts About Vegas That Will Impress Your Friends

Vegas is all about myths, legends and all the things that fall in between. But, when you're headed to Vegas, you want to be the expert so you can impress your fellow comrades. We've listed the top 10 things you'll be able to spout off with no hesitation to sound like you've got Vegas on complete lockdown.

1. Drinking in public is allowed, just not in metal or glass containers. 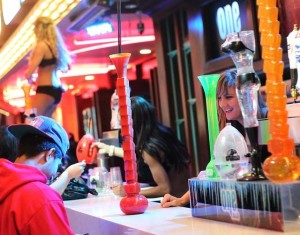 So before you trek up and down the Strip, booze in hand, make sure it's not in a can or bottle. That will run the risk of you actually getting yelled at or ticketed. This is also why there was such a huge influx and popularity of those yard-length drinks!

2. Prostitution in Vegas is illegal. 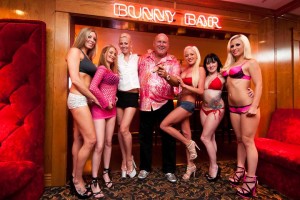 Despite the abundance of "escorts" you'll find in the phone books and on those stacks of cards being handed out on every corner, prostitution is only allowed in counties with a population less than 400,000 after being banned in 1951. The stipulation still stands to keep the less tasteful business out of Las Vegas, but this has now grown to exclude the city of Reno, too. Sex workers in Nevada's rural counties do their jobs in brothels that are regulated by the health department and undergo mandated monthly STD screenings. As of August 2013, there are 19 active brothels in Nevada and law enforcement regularly conducts sting operations to keep prostitution out of Vegas. 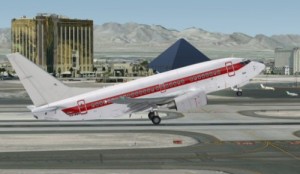 You've certainly heard of Area 51, the government area featured in countless movies and alien fiction. In August 2013, the CIA declassified a report giving insight into Area 51, stating it had been used to test prototypes for top-secret surveillance aircraft. That's about all it's said regarding UFO's and the like, so theory still runs wild as to whether or not extraterrestrial research occurs there. Regardless, it's no secret that Area 51 employs thousands of civilian contractors, and commuting to the remote base would take hours to drive every day (and you thought Los Angeles commuting was bad). Enter: Janet Airlines. Janet Airlines is a fleet of unmarked 737s flying out of a special restricted access terminal at McCarran to ferry Area 51's civilian employees between Vegas (where most of them live) and the central Nevada government base.

4. It would take 288 years for one person to spend one night in every hotel room in Las Vegas. 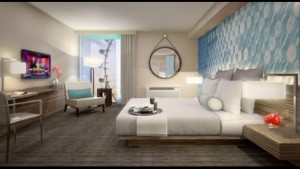 Who knows how much money all those room charges would cost on top of it all.

5. Howard Hughes hotel-buying spree began the decline of mob control of the city. 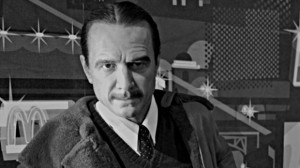 Eccentric millionaire Howard Hughes was living in the penthouse of The Desert Inn Hotel upon arriving into the city. When the staff realized he wasn't leaving, they requested him to do so. In response - he bought the Desert Inn for $13 million. Like a boss. He then proceeded to purchase Castaways, the Landmark, the New Frontier, Sands, and the Silver Slipper. In the following years, the casinos that were originally founded by mobsters would soon be bought by legitimate corporate companies, paving the way for moguls like Steve Wynn and Sheldon Adelson. Hughes wasn't all great, though, as he also tried to prevent school integration and outlawing rock concerts in Vegas. 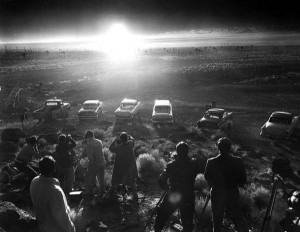 Sixty five miles North of Vegas is the Nevada Test Site, where more than 100 above-ground nukes went off from 1952 to 1962. This is the awe-inspiring power that ignited tourism to Las Vegas on a global scale. "Atomic Tourism" meant that Vegas' Western saloons became atomic themed, beauty contests to find "Miss Atomic Bomb," and showgirls started wearing their hair in "mushroom cloud" style to go along with it. Rooftop viewing parties were all the rage, and there is still a remnant of this at Atomic Liquors in Downtown Vegas, the oldest bar in the city from this unique point in history. They have great drinks, where we can "pour one for our homies" in respect to the estimated 11,000 cancer deaths that are unofficially tied to the nuclear fallout as a result of the nuke testing drifting to central Nevada and Utah.

7. There's estimated to be at least 1,000 people living underneath Las Vegas in underground tunnels. 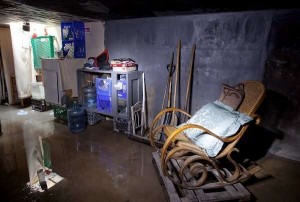 Most of them are  homeless, but some have day jobs and continue to live their lives down in the tunnels. Obviously this can get dangerous, especially if it rains for more than 3 days in a row, when flooding becomes a real threat.

8. FedEx was saved by gambling in Vegas. 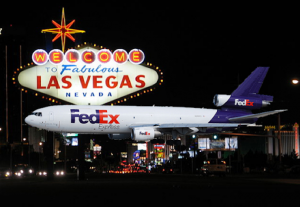 Frederick Smith, the founder and CEO of FedEx, took the company's last $5,000 to Sin City and won $27,000 while gambling on blackjack, which helped pay for the company's $24,000 fuel bill it had racked up.

9. Nevada was known as the "Mississippi of the West" due to it's segregation laws. 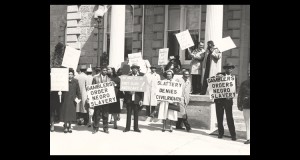 Segregation was a well-known issue for Nevada, forcing African Americans to live in West Las Vegas, until Frank Sinatra refused to continue to play at the Sands Casino unless Sammy Davis Jr. was allowed to stay in the same hotel as the rest of the Rat Pack. When the NAACP planned a huge protest down The Strip in 1960, officials realized it would be bad for tourism, so the city, casino owners and civil rights leaders met to address the NAACP's concerns. Thus, the city was finally integrated allowing African Americans to gamble and stay at local casinos.

10. Vegas is the brightest place on Earth when viewed from outer space. 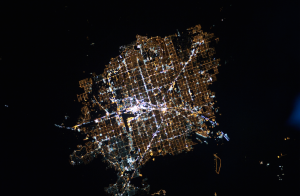 It's not surprising that Vegas has a light pollution problem, something the that activists and astronomers have been actively fighting against for years. It's no surprise when you realize there are about 15,000 miles of neon tubing on The Strip and in Downtown Vegas. Combine that with Luxor's shining beam of light (with an electric bill that costs $51 per hour) and you'll never see the Milky Way in the Vegas basin. Should you want to see the complete opposite of this hazy night sky, head out to Great Basin National Park or Death Valley, where astronomers regularly meet in the country's darkest skies to point their telescopes skyward.