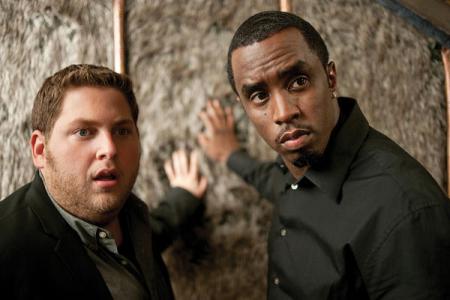 Don't roll the credits on our "Vegas Movies In Real Life" series yet, we've got more flicks up our sleeves! Hopefully you've already explored "Bat Country" like in Fear & Loathing from our first edition and spruced up your blackjack skills to be a high-roller like 21 from our last movie article. This time, we admittedly have more movies with drugs, artillery, and debauchery, but what Vegas movie doesn't have at least some of this? Let's get our popcorn ready and plan your next trip to live out some classic moments from the cinemas. 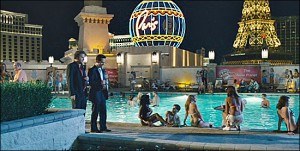 Oh, I love me some Paul Rudd. Especially when he's messed up with Seth Rogen meandering the Vegas Strip, it's weirdly adorable and endearing. If you recall the scenes I'm talking about in Judd Apatow's Knocked Up, you may already be reaching for the magic mushrooms, but hold off on the psychedelics and bear with me. There are ways to live out the adventures of these two dads without risking drug enforcement or a horrifying bad trip with face-melting re-evaluations of your existence while staring in the mirror. Instead, treat yourself to the same trippy Cirque du Soleil show that they attended with Mystére at Treasure Island. This show is CLASSIC Cirque and has been running since 1993 (it was their first resident show in Vegas). If you've ever wanted to see where Cirque started and how they evolved into the mega-entertainment company they are today, see Mystére and then KÁ at MGM Grand. They've continually evolved, but stay true to their roots and acrobatic innovation to transport you regardless of which show it is. Also, if you want to wander poolside where Rudd & Rogen were, then you'll need to check out Planet Hollywood Resort & Casino.

Get Him To The Greek 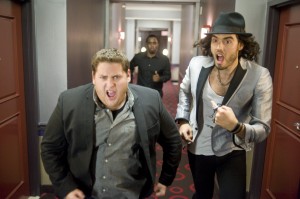 Sometimes life hands you a Jeffery. Especially if you're on a crazed binge through Sin City, but slow down, take a breath, and stroke the furry wall. Everything is going to be okay. Galavantier is here to help you. Though you might not be transporting an international superstar like Aldous Snow, we can point you in the direction of how to get an epic room like they did. Try not to cry when I tell you there is no furry walled-hotel room in the Planet Hollywood or the Palms, since this fictional suite is a combination of both locations. But both hotels offer suites that will make you pop bottles and start Tindr-ing prospects for your crazy orgies, if that's your thing. Remember when Aldous' father is found singing Rat Pack-like tunes in a smoky Vegas lounge? This is like a tribute to the retro show The Rat Pack is Back over at The Plaza that you can see during your visit. 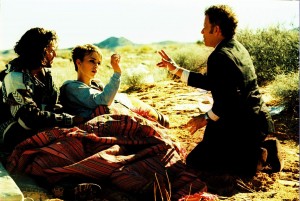 Besides the fact that this is the movie that belatedly inspired me to cut off all my hair, Domino is one of those super-woman, badass chick movies. A "feel-good" movie, for those of you who share a similar taste. Loosely based on a true story of a model-turned-bounty-hunter Domino Harvey, you'll see the plot eventually take the characters to the bright and dangerous lights of Sin City. Before reaching The Stratosphere for the ultimate showdown, they take an unplanned detour through the familiar landscape of the Nevada desert (...after crashing their Winnebago. We suggest skipping that type of arrival.) Filmed near Bonnie Springs, the desert scene is almost complete until you realize you don't have the mystical Tom Waites show up to hint at your destiny (just play some of his delightfully bizarre tunes and you'll get the gist). When you're ready to enter the city limits, walk up towards The Stratosphere and elevator yourself all the way to the top. Even though you won't be making multi-million dollar deals with gangsters resulting in helicopter shoot-outs, you have your choice of adrenaline-filled rides or the classy spinning bar (Level 107 Lounge) revolving around the top.