You all loved hearing about the ways to live out your favorite Vegas movies in real life in our last article, so we decided to explore some more movies and more Vegas mayhem with round 2. For this edition we decided to explore classic Vegas films like 21, Vegas Vacation, Showgirls and 3,000 Miles To Graceland. Don't miss out living the Vegas film fantasy.

Elvis is a big deal all over the world, but mostly in two cities: Memphis and VEGAS. The Elvis influence on Las Vegas is obvious to anyone on the Strip, or even off of it. Those Vegas impersonators are everywhere in this city, and we know and love 3,000 Miles To Graceland for tapping into The King's importance to the city.  When you're ready to pull off a bank heist dressed like a gaggle of Elvi, you should know that most of the film was actually shot in America's Top Hat, or Canada. However, there are some scenes you just can't fake. When Kevin Costner blows up the gas station in the beginning of the movie, that explosion was filmed at the Nelson Ghost town just outside of Vegas. The gas station itself was only built for the film, so if you make your way out there be sure to fill up beforehand so you don't get stuck at a gas station set to experience irony firsthand. The coolest part is that you can still see the Grumman OV-1 Mohawk plane used in the movie, so park at the Gas Station and find your way into the ghost town from there. The scenes of the Elvis convention and the main heist were filmed at The Riviera, so swing by there in your bedazzled bellbottoms (but leave the semi-autos at home).

For anyone thinking that the life of a showgirl in Vegas is a piece of cake, you haven't seen Showgirls. Endless rehearsal, sexism, blood, sweat and tears? Not for the faint of heart. Of course, Showgirls only racks in 2/5 stars on IMDB, so the persuasiveness of the main character played Saved By The Bell star Elizabeth Berkley might not be "all there." Still, it's an entertaining Vegas movie with a lot of T & A. The majority of the film was set in hotels like Riviera and Stardust before its demolition. Of course, if you want to feel like an exotic dancer in a kick-line soaring towards the top of stardom, you'll have to pull a Pretty Woman by visiting Versace in the Forum Shops just like Nomi did in the movie. The window shopping alone inside the Forum Shops makes me consider removing clothes to afford that bomb-ass Tom Ford purse on display, and then I remember investing in my diploma. Sigh. When you're ready for some real showgirls, check out Jubilee at Bally's, the oldest-running show in Vegas, or Cheetah's Topless Club, where more of Showgirls was also shot. 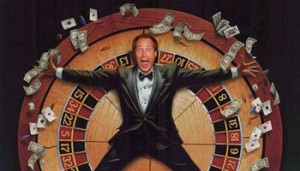 Oh, that crazy Griswold family. Their hijinks through Sin City are known far and wide, and since 1997, so if you want a piece of the Oswald family life, look no further than The Mirage and MGM Grand. The family is staying at The Mirage for the movie, but you can also see a bit of MGM Grand when they see Wayne Newton in concert at MGM Grand. There's a bit of the world-famous illusionists Siegfried & Roy too, when Clark wins tickets to the show and gets turned into a tiger. Things happen. Remember when Rusty wins the big wheel spin? That's right across the street from The Mirage at Casino Royale. You can't forget to do a trip out to the Hoover Dam, of course, because a family trip wouldn't be complete without some educational history to absorb! Luckily, we've got deals on tours, river rafting, helicopter tours and even skydiving out by this mega-dam. 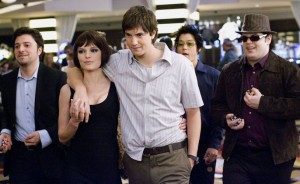 I'm going to start this one off by saying if you can count cards - SHHHHH. This is a city of casino professionals and both pit bosses and advanced technology is watching you for patterns and behaviors of an advantage player. You will get 86-ed from hotels for life and Galavantier in no way condones card counting. That being said - how great is the movie 21?! I'm lucky enough to not be MIT-smart and a horrible mathematician, statistician and all-around card player, so the temptation of card counting my way to the top of a blackjack table isn't strong. But this movie inspires lots of visits to our city with intentions of winning big, so let's cover where Kevin Spacey and Jim Sturgess hit up the tables.

Most of the movie has scenes shot at the casinos inside Caesars Palace, Hard Rock Hotel and The Venetian. The gang stays at Planet Hollywood (which we'll be completely delving into for the blog next week) and they are treated to some baller penthouses. (Sometimes, you just deserve the best. Never forget that.) Once you stack those chips into piles high enough to see The Stratosphere, color up, cash out and head over to The Forum Shops. Yes, just like in Showgirls, this is THE place to shop and drench yourself in designer threads for a statement that says "I own this city." For your final hand, head over to where the main character Ben plays for a big win on his own, and keeps gambling when he knows he shouldn't, at Red Rock Resort & Casino. They give the entrance a pretty cool sweeping camera shot and  you get to see the flames flaring up as Sturgess walks into the casino, one that made me go "THAT'S RED ROCK - LOOK, I LIVE IN THAT CITY!"