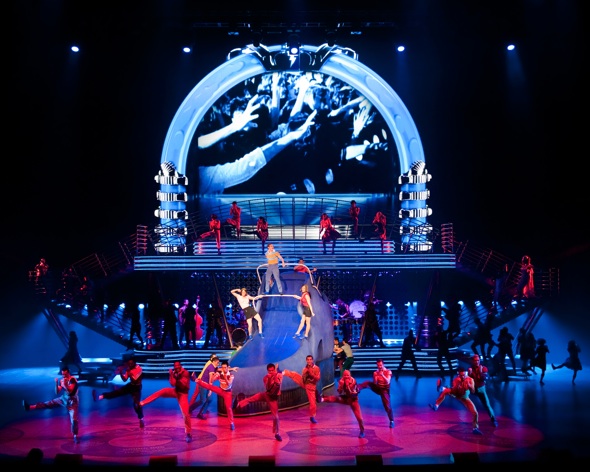 Just when you thought Elvis Presley couldn’t get any bigger in Las Vegas, along comes Cirque du Soleil to give the King of Rock and Roll his biggest tribute yet. He may have performed his last show in Sin City in 1976, but he’s back on stage in “Viva Elvis” at Aria at CityCenter.

A gaggle of giggling girls scream their way on stage to kick off the show and before you know it, Elvis has entered the building. Cirque dancers sporting blue suede shoes bop and sway to the song while black and white videos of the King take center stage.

Col. Tom Parker narrates parts of the story for the audience, a common thread throughout the show. And like “Love” at the Mirage, Cirque gives Elvis a treatment only it can deliver. Two guys sporting jeans and white T-shirts make child’s play of a guitar hanging from the ceiling as “One Night” plays. This is a fitting aerial tribute to Elvis’ twin brother Jesse, who died at birth. Then Cirque gives “All Shook Up” a gospel treatment to tip its hat to Elvis’ gospel roots. Super hero acrobats drop from the ceiling and literally climb the walls with “Saved” in the background in this more traditional Cirque du Soleil treatment that grins at the King’s fondness for super heroes.

The show follows his career through his Army days and those heart-stopping hip swiveling moves all the way to the end of his career. Never-before-seen home movies and footage of the King performing, archival footage and original recordings never heard by the public all serve as a backdrop.

In all, about 30 of Elvis’ songs are featured in the show. And if you like the music, Legacy Recordings and Elvis Presley Enterprises Inc. have released “ELVIS — The Album,” a 21st century celebration of Elvis and his music, featuring the voice of the King in a whole new context. The album re-imagines the king’s own vocal performances in a broad variety of new musical settings. This new sound echoes Elvis' own versatility and ability to master a huge variety of music genres while incorporating elements of garage rock, punk, urban and hip-hop.

The album includes songs from Elvis’ rise to fame in the ‘50s, his movie soundtracks, his return to the stage in the “’68 Special” and his ground-breaking appearances in Las Vegas. "Burning Love," "Suspicious Minds," "Blue Suede Shoes" and "It's Now or Never" are among the songs that have been transformed.