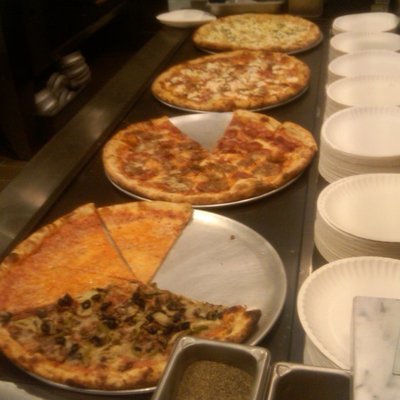 The Best Places To Grab A Slice in Vegas

Are you a pizza snob? Don't be ashamed about it. Own it. Embrace the fact that you know exactly what you want. However, just because you are from New York City or Chicago that does not automatically make you an expert. If you like the thin crust Vegas has plenty of it and if you are into Napoli style VPN pizza you can find that on the strip as well. So, what is the very best? Well...in Las Vegas I am a huge fan of Settebello but if you are visiting that is no help to you because it is way off strip. (If you are in Utah or Southern California look for it there as they have a few restaurants spread out)

So, if I am on the strip I am heading into D.O.C.G at the Cosmopolitan Hotel. It is not true VPN pizza but only because they don't have some certification. Aside from that they have the high heat, the floppy but well charred crust and ingredients that make you ponder going on a permanent pizza diet. The marguerita is really all you need along with a glass of red wine or a crisp glass of bubbles. If you don't want the full blown sit down meal experience head to the bar and you’ll get the same thing along with some good conversation. While you are at the Cosmopolitan check out Secret Pizza and grab a slice. This is closer to that slice that is often referred to as New York Style with a piece large enough to fold over. They reheat it and it develops a crunchy crust. This is definitely beer and pizza material for a late night snack.

If you walk past the Monte Carlo Hotel you'll see 800 Degrees Pizza and their concept is easy. They give you a high heat pizza in a quick fast procedure. You walk in, decide what pizza base you want and then move through the ingredients. Then they pop it into the oven and in about a minute your pie is in your mouth. If you are lucky they put the right char on the crust and the center is just the right amount of soft. The ingredients vary but the price starts off very low so you can expect a pizza to share for under $10. Best deal in Las Vegas and they just opened another location at the SLS Las Vegas.

If you are still looking for fast food you can try Pin-Up Pizza in front of Planet Hollywood. This is a monstrous slice and probably the best for a quick walk past type of meal. The same thing holds true for Flour and Barley at the LINQ and Slice of Vegas at Mandalay Place.

If you need a little more of a casual sit down pizza experience try Grimaldis at Palazzo for New Style pizza or go big and try Five 50 Pizza Bar at Aria where Chef Sean McClain has brought a little fine dining flair to his casual approach to the pie. It's not NY Style, it's not Chicago Style and it is not VPN . It is something in between all of those and it is very good. They have a late night counter as well.