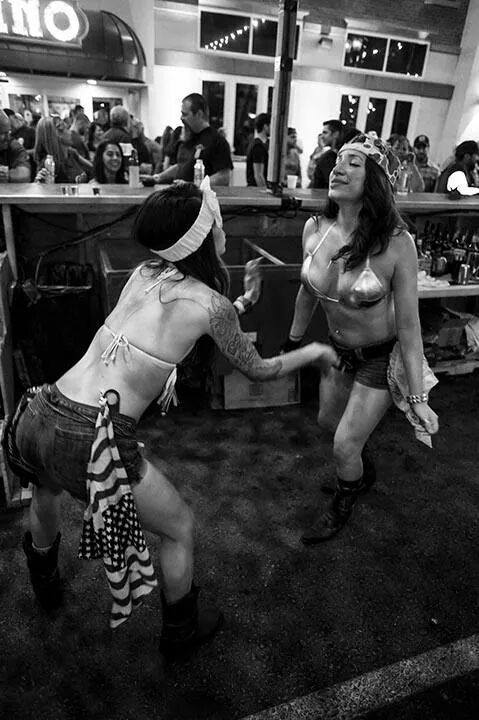 So you want to party where the cool Vegas people do, eh? Good on you, mate, for using that piece of advice from the well-traveled among us. If you want to get to the heart of a city quickly, you eat where there's a line of locals out the door and you party where the locals do. Downtown Las Vegas (DTLV) is a hipster's paradise as well as an everyman's eden. You'll find countless watering holes to bunker down in, art galleries, boutique shopping, small businesses flourishing and tons of options for your noms and swigs.

To help set you on the right party path in DTLV, here's where you will be most likely to find a drunken local happily cheering with friends:

Commonwealth
Probably one of the closest hybrids to an on-Strip party club and a local hangout, Commonwealth hit the scene hard and strong right off the bat when it opened in 2012. They'll usually have a DJ spinning on the rooftop deck most weekend nights and sometimes some live music down below in the main room. There's the oft-mentioned "secret room," which means it's approaching oxymoron territory, that can be used for private parties or mixology events. I will say I partied here once during a particularly windy night in Vegas and the rooftop became engulfed in a sandstorm, but don't worry - that doesn't happen often. It was just a winterland bonding moment for all the patrons.

Hogs & Heifers
This place is no secret if you're looking for a hell of a time. A biker bar through-and-through, Hogs & Heifers is a party just waiting to happen every day they open their doors. Heck, just look at their online reviews. One of the only negative complaints I've ever heard about this spot was from a motorcycle enthusiast who wasn't allowed to wear his colors, and I'm sure this spot has their reasons (preventing gang fights and choreographed rumbles á la West Side Story) but don't shy away because of it. You're more than safe in the hands of those gorgeous bartenders, who have become one of the main perks of this operation. Everyone loves their fun-loving nature, killer bar skills, and of course, dat body.

Don't Tell Mama
No matter where else you're going on your DTLV bar crawl, PLEASE do yourself a favor and stop by Don't Tell Mama for at least a drink (bet you can't stay for just one). It's easily found right on East Fremont nestled among Commonwealth, The Griffin, Insert Coins, and Park on Fremont, so you can understand how popular this little gem is. It's karaoke nation up in here, but if you plan on singing you'll want to get there early and make damn well sure you know your lyrics. The competition is fierce and the staff are all seasoned performers that know how to get the crowd going. The piano is usually your only accompaniment, besides the rest of the patrons singing and drinking along. Even if you don't have the balls (or ladyballs) to belt out a tune, you'll have plenty of entertaining covers of your favorite songs from the rest of the Don't Tell Mama family. Seriously, you'll leave here feeling great and I'll give you 50 dollhairs if you walk out the door NOT singing (the dollar/dollhair joke really works best when you can't read my trickery...).

The Griffin
Describing The Griffin to you, if you've never been, is going to be a bit more difficult for me. The reason this is is because most nights I find myself drink-in-hand at The Griffin, I'm trashed beyond all recognition. It's a truly awesome spot for locals and visitors alike because of that easy-to-access location in East Fremont. You won't be alone when you're stumbling into the doors after awkwardly searching for, finding- no wait, that's my credit card...HERE'S MY ID!, handing over your license and entering the darkness of The Griffin.

It's got these gothic, yet cozy, vibes to the interior with exposed brick walls, vaulted ceilings, a warm, flickering fireplace and lots of other people. Seriously, from my drunken recollections, here's what you'll do: You'll sidestep your way to an open spot at the bar, rattle off your drink order, talk up that cute bearded fellow next to you, and chill against the wall to continue your libations and shenanigans. If you're a guy, feel free to swap in "that cute bearded lady next to you."

Downtown Cocktail Room
No matter how many times I've been to this place, I still have troubles opening the glass door (push? pull? neither?) but once I'm in, it's just the best. You'll feel like you fell down the dark rabbit hole of desire with a venue that's full of deep reds, colorful art, and dark walls that play the perfect host to DJs and live performances alike. The bathrooms are a kick, too, if you're into that kind of amusement. One-way mirrors that you can easily forget about when you're in there and "*gasp!* Someone's walking in! Oh wait...they can't even see me." I highly recommend getting your crew a bowl of punch (the Pilgrim is my favorite) to power down before hitting up your next spot, but all cocktails offered are quality drinks with a substantial alcohol content. 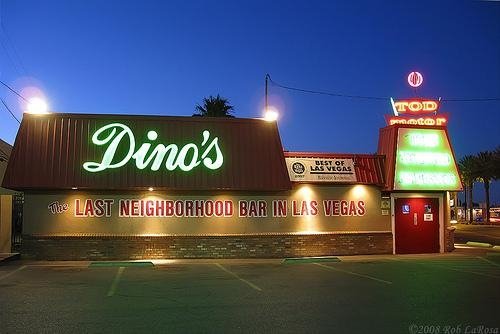 Dino's
I would have put Dino's at the top of this list, but I want you to get the impression that you should definitely END your night at Dino's. This infamous karaoke spot really picks up in the later hours of the night and you're going to be the ultimate rockstar after popping into those other bars above. No one includes Dino's on the list because of its decor, sexy bartenders, VIP status or anything superficial like that. If anything, this place reminds me of the dingy basement bar I hung out at in college. Dino's is the ruler of the list because of its unwavering character. Its legendary joie de vivre. That familial feeling of "we're all in this song together."