Ronnie Rainwater, Delmonico Chef de Cuisine and Duroc pig exhibitor, softly-stated our journey for the next 90 minutes in one sentence: “We used every part of the pig and just tried to be true to our restaurant and showcase the whole hog, using everything but the squeal.”

Hearing this made me a bit fearful as we anxiously awaited to travel the mapped menu of the hog’s carcass. I’m not a big fan of pork – except for the mainstream cuts of pork belly, bacon, and carnitas – and I was curious to see if this menu tasted roughly the same. Pork is pork, right? ‘The other white meat.’

We immediately discovered this wasn’t chicken and began our voyage with the first course of headcheese sitting atop wild arugula and rye toast garnished with pickled mustard seeds and cornichons. Fellow Galavantier, Katie, had to muster some courage after Chef Ronnie described headcheese.

To clarify – it’s not a dairy product used to top your favorite pizza. Headcheese is a jelly-like cold cut made from the head meat, tongue, feet, and heart of the pig. Hey, at least they didn’t include the brains and eyes.

But, let’s not be pretentious about food. Most of today’s tasty dishes come from humble beginnings – the Maine lobster, oysters of New York, and ratatouille. They’re from the modest working class who made sure not to waste, but rather, use every morsel. It was this first course that Katie and I came to immediately appreciate Chef Ronnie’s vision to explore the whole hog and respect the animal by using all parts, like the headcheese.

“Something about wasting food doesn’t sit well with me,” said Rainwater. “As a chef and a business, we try to use every part of the animal – like featuring the filets of a fish, but using the bones for a sauce.” 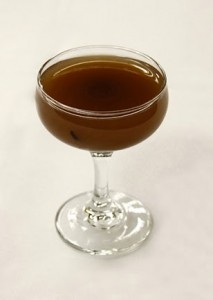 The headcheese didn’t look to sit well with Katie as she hesitantly gulped down that first course in one bite.

I loved the second course of Cajun boudin boulettes with caramelized onion emulsion and petite celery. Just imagine juicy pulled pork from the hog’s leg, shaped into a ball, breaded then deep-fried.

Most guests at the Chef’s Table favored the next course of panéed pork chop with apple smoked pork stewed butter beans and southern cooked greens. It was a scrumptious piece of meat, breaded and cooked well. The pork chop was paired alongside a caramelized porchetta with a brussels sprout, rainbow carrots and banyuls reduction. It proved difficult to cut because the skin was chewy and not crispy enough to break. Too bad most guests avoided the caramelized skin, though,  as it was pleasant to eat with the porchetta. But I had my sights set on the next course.

The butterscotch bacon pudding dessert was my favorite of the night.

“The dessert was fun too,” explains Chef Ronnie. “We used candied bacon and rendered the fat of the hog for the cookies.”

I felt like a kid on Halloween, with treats of sugary bacon, light pudding, and a biscuit similar to a Nilla Wafer. All I could do was smile and blink slowly as I devoured this course.

But let’s not forget the alcohol – Templeton Rye, which was the featured whiskey pairing for the Duroc pig. The Pomme & Swine was a fascinating cocktail, infusing the Templeton Rye whiskey with the hog’s fat overnight, then filtering and skimming the fat off. The hint of pork mixed with the organic apple bitters complemented the dessert. Chef Ronnie worked with Max Solano – Delmonico’s beverage director and mixologist – to pair the cocktails with the meal.

It was good ending on a sweet and lush note.

Chef Ronnie and Delmonico was exceptional in leading us in our exploration of the Duroc pig. The experience of watching them prepare our meals through the Chef’s Table, and his personal explanation of each course fueled the mythology of pork. I’ll always favor carnitas and pork belly, but at least now appreciate the other parts of the hog.

Still, don’t expect me to be eating headcheese anytime soon.