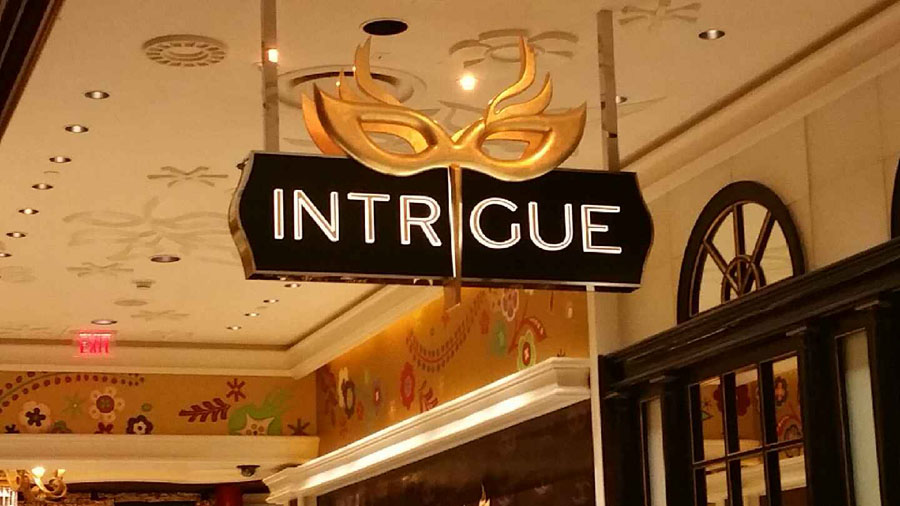 Last night, the former Tryst Nightclub opened its doors for the first time as the reborn Intrigue Nightclub. While walking down the long, spiraling staircase to get to Intrigue, we had no idea what to expect. We almost expected the revamped nightclub to look a bit similar to its predecessor, but we were pleasantly surprised by what we found once we walked through the mirrored hallway and into Intrigue. When we entered the nightclub, we were greeted by two dancers on both sides of the walkway that leads down to the dancefloor. Their costumes were outrageously amazing and gave off a modernized burlesque vibe.

The entire club is laid out so that you can't really see everything all at once. With all of the pillars and different walkways, you're instantly intrigued (lol) to venture further into the club to see what's waiting around the corner. The waterfall outside is just as majestic as it always has been and the patio has been adorned with mini chandeliers to perfectly complement the elegance of the cascading waterfall. 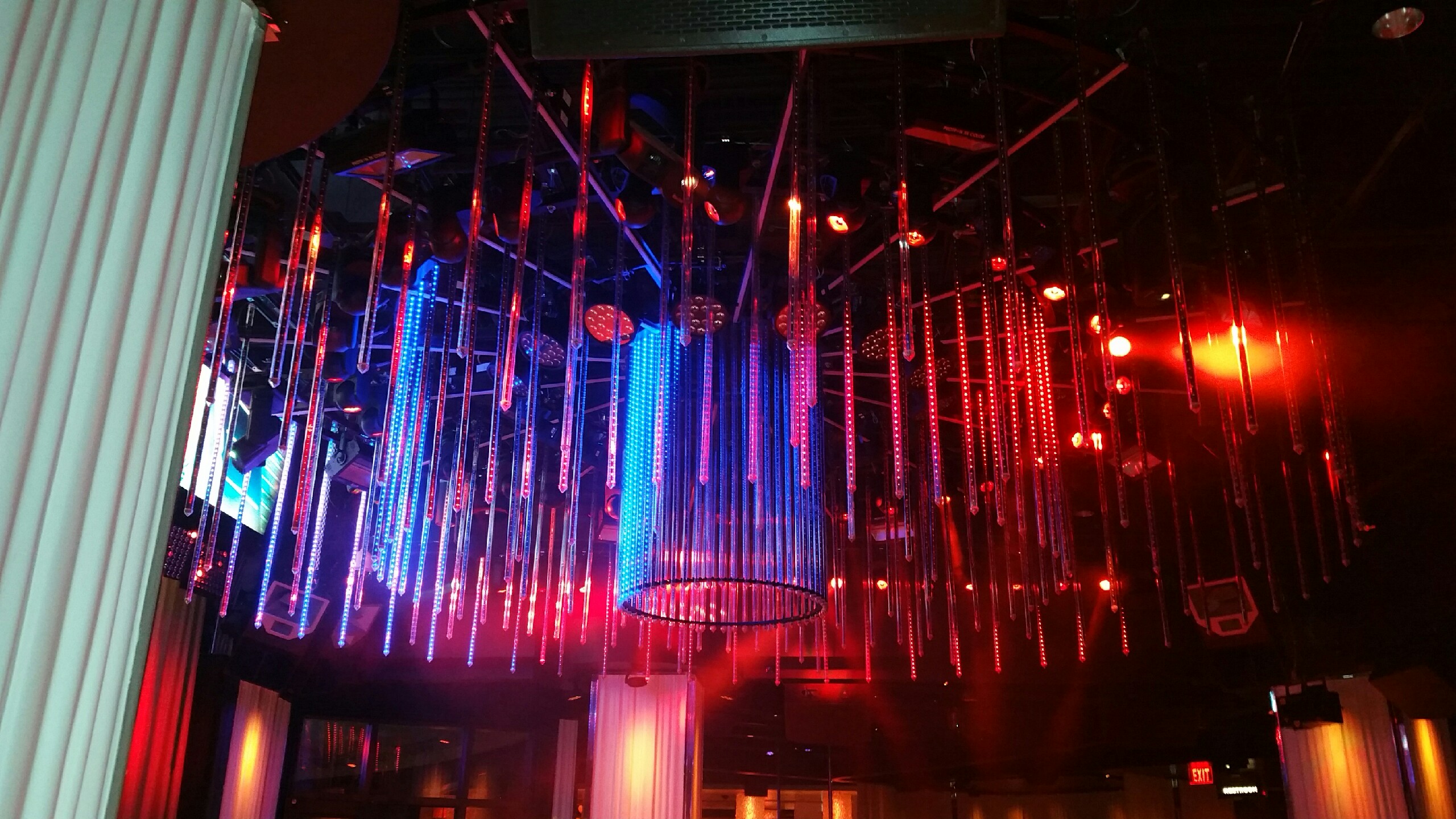 Overall, we're really pleased with the changes made to the nightclub. The entire venue is a lot brighter than Tryst was, and in place of the former nightclub's signature red, colors of pink, purple, and white filled Intrigue with provocative and intimate vibes. The service was also on point and drinks came pouring from the open bar until 11 pm. We felt like we were well taken care of at our table as bottle service constantly came by to check on us and to see if we needed any more drinks.

At some point during the night, dancers were placed throughout the club to entertain the crowd. It was a fun surprise and the girls are extrememly talented. There was also a woman doing acrobatics all night on the DJ booth... we felt like that was pretty impressive. 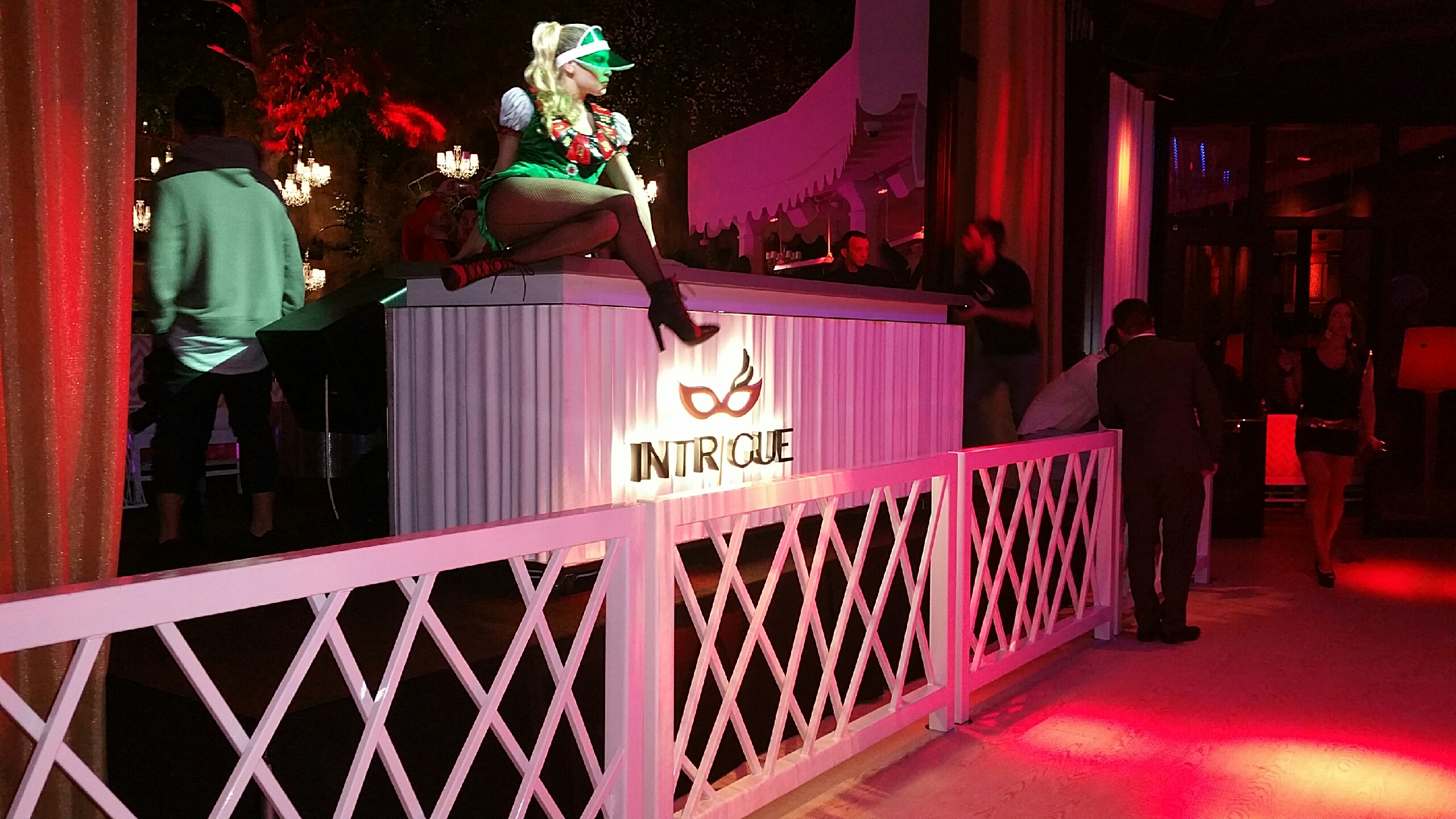 The much talked about, super secretive VIP room remains mysterious. We only know that the entrance is a gold door, separate from the main entrance, and the room is behind a one-way mirror. You can't see anything going on in there, but whoever is behind that glass can definitely see you. We even asked an employee about the room, and she said that she wasn't even allowed in there.

As for the nightclub's entertainment lineup, the DJ played Hip-Hop, Top 40, and EDM all night. The music kept people dancing and the experience itself is so much fun that we didn't even miss having some superstar DJ. If you're looking for a concert-type experience, then Intrigue isn't for you. Intrigue feels much more like an intimate place were you're supposed to have fun with your closest friends. Rather than making the music the focus of the entertainment, the dancers and the venue itself provided a "make your own entertainment" type of experience.

Intrigue might be our new favorite nightclub because of how chill and intimate it feels. We're really excited for all of you to check it out tonight! If you're looking for Intrigue's event lineup, tickets or bottle service, click here for more information. Tweet us or Facebook us to tell us about your experience!