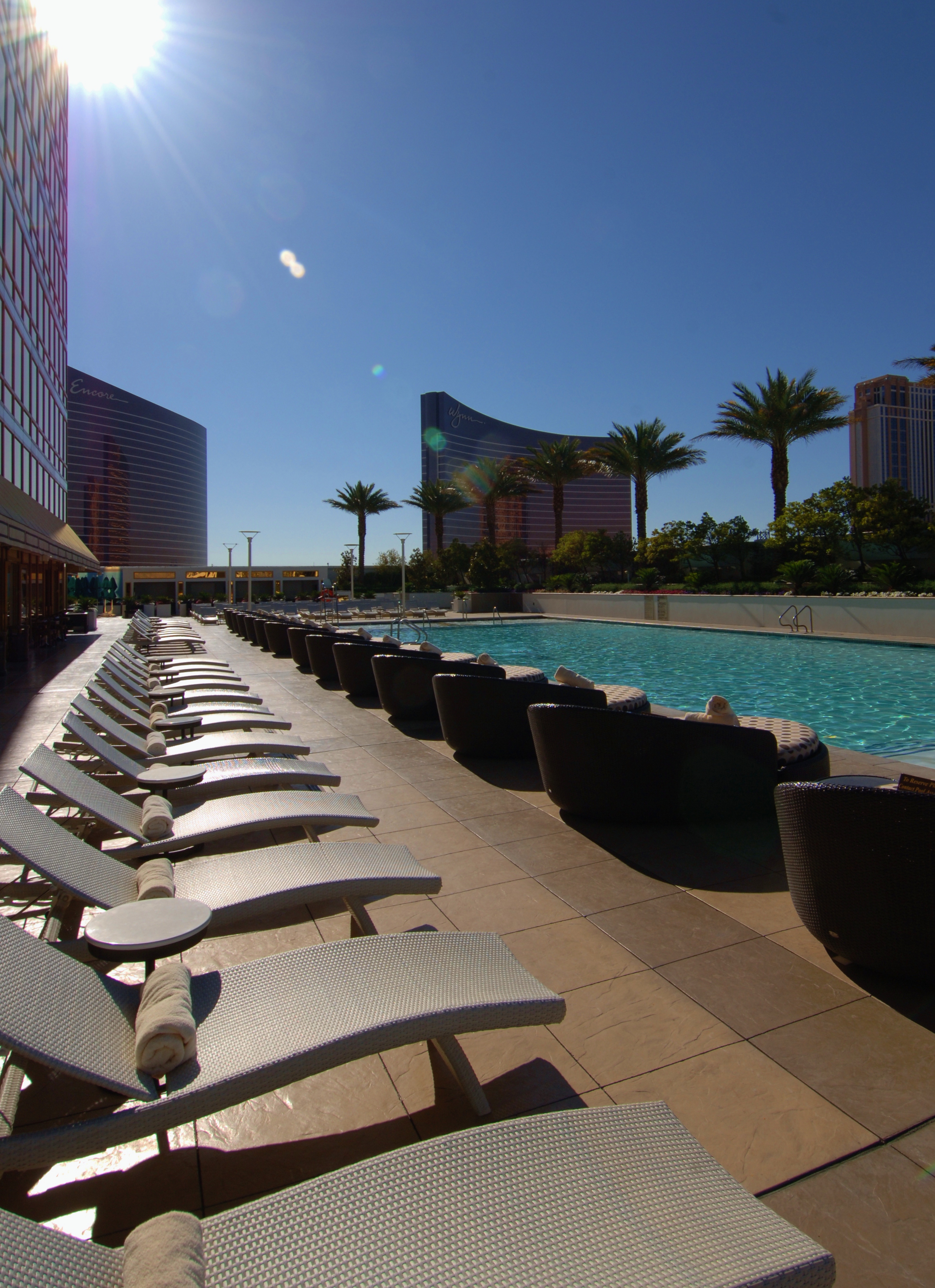 Ah, Las Vegas, the 24-hour, non-stop, go-go excitement city! Get your party on! Rock till you drop! Wow. Sometime you wonder if it’s possible to just chill out a bit? You know, relax? Like you’re supposed to do on vacation?

OK, deep breath. Yes, it is possible to find relaxation in Las Vegas. Even right on the Strip!

The first place you’ll want to relax is of course in your hotel room. For this, you might want to look toward some of the hotels which are “non-gaming,” that is, they don’t have a loud casino in the lobby. Your best choices in this category include the Four Seasons (connected to Mandalay Bay, but a world apart), TheHotel—soon to be the Delano—the exotic Mandarin Oriental (their hotel is so removed, the lobby is 24 floors above ground level), and just off-Strip, Trump. All have some of the nicest rooms on the Strip, deluxe amenities, and their own guests-only pools.

Speaking of pools, obviously that’s one of the best places you’ll want to go chill out on your vacation, maybe splash around a little or just snooze on a chaise. Have they all been infected with this crazy daytime disco nonsense? Haha, well no. At the Venetian, the Venezia tower’s pool area, adjoining Bouchon bistro, is a quiet, verdant garden that rarely gets crowded. If you want a private pool experience, without all the tabloid TV style nonsense, consider Azure, on the other side of the same property. While it’s got DJ music, several pools and fun drinks, it’s not so crazy you’ll leave with a headache. If you just want to indulge in your own cabana for an afternoon, consider Wynn/Encore or Bellagio pools or maybe you just need a float down a lazy river? Take your pick at Mandalay Beach, Monte Carlo or MGM Grand’s pool areas.

Need some assistance chilling out? That calls for a spa, and you’re certainly in the right place for that. Virtually every property has one, but perhaps the most impressive—places so chill you’ll never want to leave—start with the Encore spa, Qua at Caesars Palace and Mandarin Oriental. Bellagio and Mandalay Bay spas are also excellent, as are the smaller Aria, Treasure Island and TheHotel facilities. Off-Strip, Red Rock Casino, M Resort and Green Valley Ranch all have beautiful spas.

Speaking of off-Strip, that’s a great idea for relaxation: consider activities in some of the area’s nature, including Red Rock Canyon, Springs Preserve, Bootleg Canyon’s zip-lines, and even Mount Charleston, the small snow resort less than an hour away!

Maybe you’d enjoy a relaxing meal? Some of the Strip’s more sedate dining spots include Pinot Brasserie at the Venetian, Swan Court inside Mandalay Bay’s Aureole, Emperor’s Court at Caesars Palace, just to name a few. If you want something very special, book the waterfall-side lagoon table at Wynn’s Mizumi Japanese restaurant. Or maybe you want your relaxation more…um… relaxed? Try the outdoor patio at Carlos N Charlie’s, overlooking Flamingo’s nature conservatory, Solara café by Wolfgang Puck at Palazzo, or… maybe the patio of Rao’s Italian in Caesars Palace. Did you know you can play a nice slow game of bocce there?