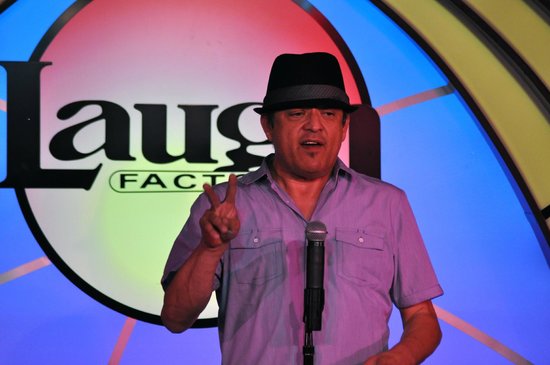 Stand-up comedy has been experiencing somewhat of a boom in the last half-decade. With the new podcasting trend and social media, comedians are able to promote themselves like never before and shout from their soapbox far and wide. Live comedy is a unique experience and should not be overlooked when planning an awesome weekend. Going to see a comic perform is one the of the perfect pregame strategies. Vegas has been lagging behind comedy hubs like LA, New York and Austin when it comes to a true grassroots comedy scene, opting for resident comic shows like Carrot Top and the like. That is no longer the case with tons of speciliazed comey venues opening up and many live rooms booking comedy talent.

Here are the best comedy clubs in Vegas you must check out:

It is hard to top The Showroom at South Point. With heavy-hitter comics like Joey Diaz, Jay Mohr, and Norm MacDonald making it their club of choice, along with fairly priced tickets, elegant banquettes and a 400-seat capacity this is the perfect spot for pregame beers and laughs for locals and tourists alike.

Located within the Tropicana Hotel, this club has everything you could ever want in a live comedy venue. This venue Even USA Today called Laugh Factory “the #1 comedy club in the country.” Can’t go wrong with that!

Another classic and esteemed comedy joint located at Harrah's Casino. Three comics take the stage twice a night at 8:30 p.m. and 10 p.m. to slay the crowd, and it's always a hoot. Head to the Improve for seeing the most original up and coming comedy rockstars.

One of the oldest theaters here in Vegas inside the legendary Riviera Hotel, this is where comics go to get in touch with the soul of Vegas. Nothing flashy or modern about this club, just pure classic comfort and service.This is where rebel comic Doug Stanhope  got his start!

Located in MGM's underground floors, Brad Garret's is a top-rated comedy hotspot that features comedy masters daily along with the clubs namesake. Brad Garret's was voted best comedy club by Las Vegas Weekly in 2014, so definitely stop in for some drinks and laughs before a night out on the town!

Click here or call 702-448-6900 to get the ultimate white-glove booking experience and best deals on Vegas entertainment!